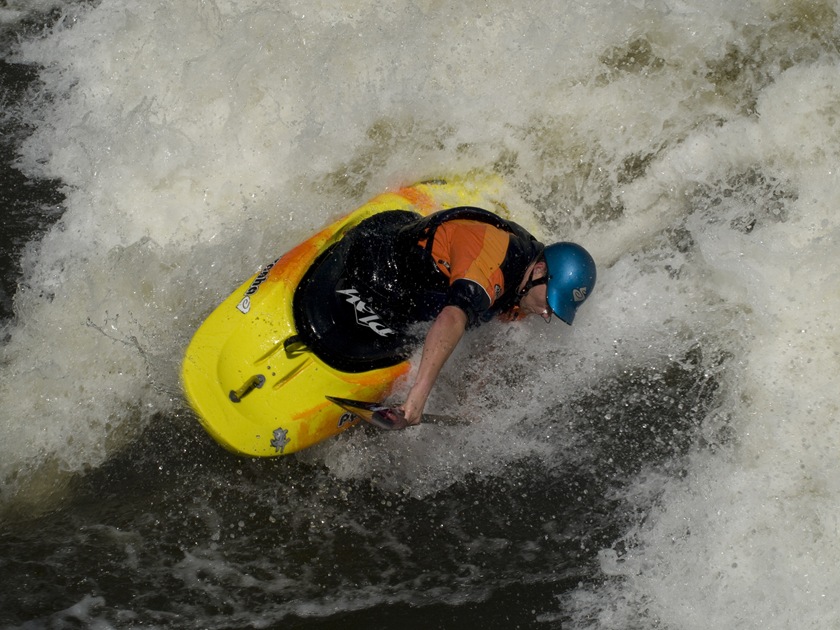 I’ve managed to get a bit of paddling in over the last fourteen days. The water that last weeks downpour provided seems to of held well.

The week before last saw a decent of the mighty Ock with the pathfinders ending with a splendid session messing round in the weir. Possibly pulling each others decks and push each other over isn’t the best example to set but every one seemed to have fun.

Tuesday saw Oxfordshire have 52mm of rain fall. That’s the same amount of water that it gets in the entire of June normally. This had the obvious effect of making the Thames rise a little.

With Hurley in the stantion and unable to face driving to Sunbury or any other the other Thames weirs after work I headed into Abingdon to the KCC hut where a decision was made to, wait for it, make a decent of the mighty Ock! actually the swollen river was quite interesting and quick. This meant a quick retreat was made to the pub

These levels also meant that the Blastathon had to be postponed for two weeks.

In the vague hope that the levels might of dropped a little Vicky and myself drove down to Hurley on Sunday only to find it still a little on the high side. We decided to go and take a look at Marsh weir instead.

Marsh looked excellent a lovely hole/wave had formed, but, there was the down side. 50 metres down stream is a bridge which is built so that it has cross beams under the water. This combined with the other large amount of woodwork under it makes a swim  very unappetising.

Seeing as neither of us had paddled there before and we were the only two paddlers there (a large contingent had just got off) we talked ourselves out of it. Ah well, I will be back next time it rains as the weir looks amazing.

Monday came around and we took the Pathfinders to Sutton Courtney to play in the the ‘Haystack’ wave. This only runs when the third weir at Sutton is open. This happens rarely, in fact this was the first time that I had witnessed it. Fast, fun and a little flushy everyone seemed to enjoy it.

Wednesday, Saturday and Sunday. Hurley was on an ‘odd’ three gates, and amazing fun. More retentive than a ‘normal three’ this was great all three gates were being used and everyone seemed to be loving it.

Next week, the Blastathon is back (assuming we don’t get another downpour).