What to do in Scotland when there is no rain.

The KCC heads to Roy Bridge in its annual quest for Scottish whitewater. 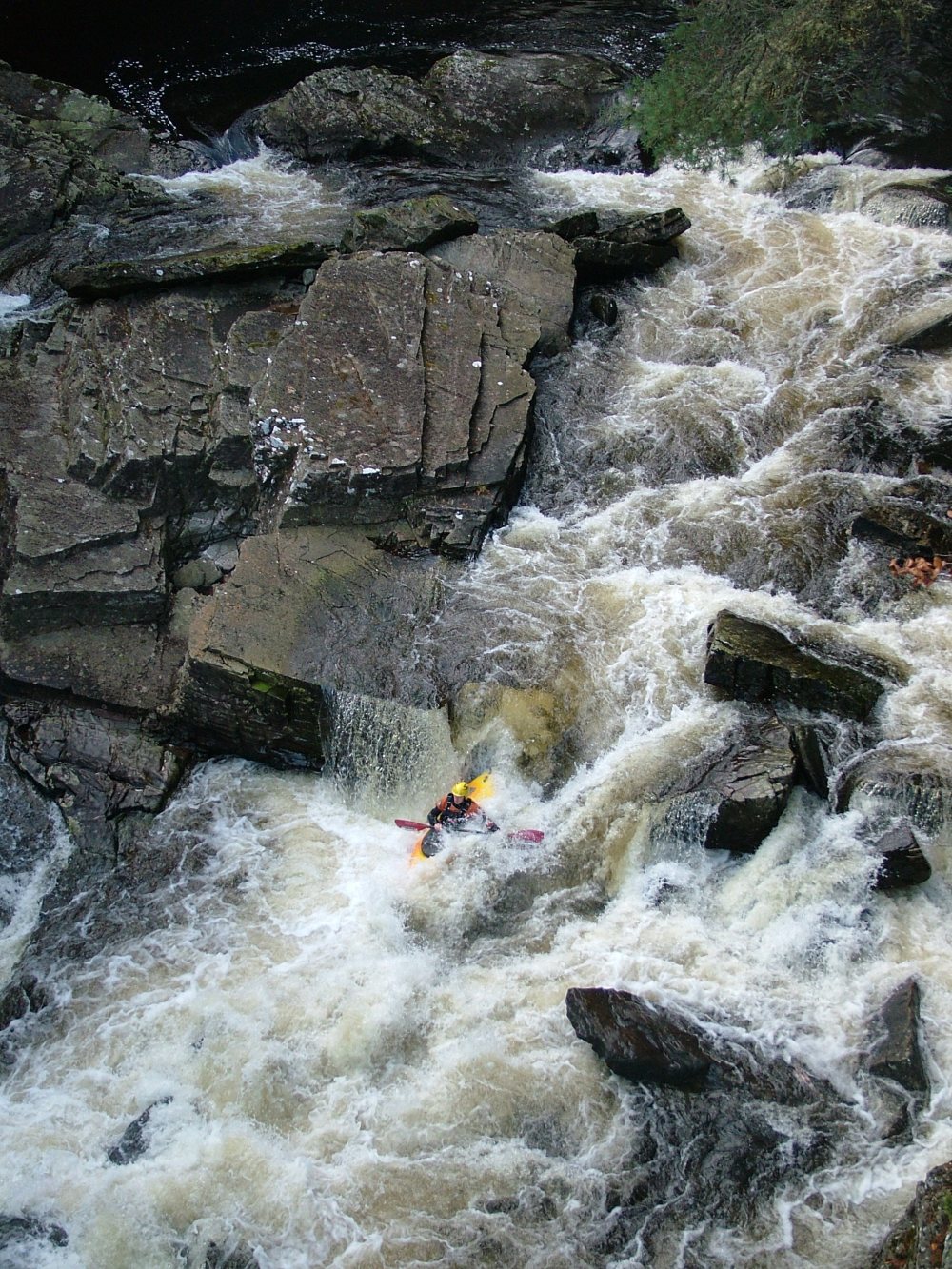 There appears to have been a trip to Scotland organised every year by members of Kingfisher Canoe Club for as long as most people can remember. I myself have been for the last three years, and despite last years’ tragic accident, have always found the combination of imposing scenery, wonderful rivers and great company to make for a greatly enjoyable trip.

As he has done before Fred organised accommodation in the holiday chalets at Roy Bridge for sixteen of us; Myself and Fred, Dave Hodgkinson, Mike Neal, Seth Townley, Vicki and Martyn Rolls, Lucille Savin, Dave Surman, Phil and Doug, Stuart Brighton, Ben Williams, Andy Wicks and Martyn Read.

What made this trip different from previous years? You can probably guess from the OED quote above, there was no rain. And there hadn’t been for a few weeks before we arrived. Typically it decided to bucket down the day we left. Despite this we managed track down what little water there was and paddle everyday.

What makes Scotland so great?

Whenever I’ve been to Scotland before the rain has been as reliable as jelly babies. This combined with a huge number of rivers of all levels of difficulties and an enlightened access system makes paddling north of the border pleasure.

The Land Reform (Scotland) Act and the Scottish Outdoor Access Code have created a right of access to all land and water and defined the responsibilities of both land owners and those who wish to visit and enjoy the countryside. What this means for paddlers is that as long as we live up to the responsibilities in the access code no one can claim to try and stop us enjoy the opportunities provided by the land. Why can’t the law in England and Wales be as enlightened?

Apart from the lack of farmers chasing paddlers down the bank shouting “Oi! Get orf my lands!” the well documented nature of the rivers in the Whitewater Scotland guidebook and the online water level gauges at http://wheresthewater.com make finding suitable rivers with water in them a cinch.

The Etive and its tributaries.

Of course the lack of water means nothing to the Etive which runs in low water and gets progressively scarier as the levels go up. Over the course of the week we ran the Etive three times. On the first day the level was low and on the second run on the Tuesday it was even lower. At these levels the drops all go but the bits inbetween can be a little exhausting as you continually end up grounded on exposed rocks. 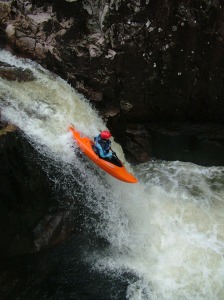 To supplement this we ran the Allt a’ Chaorainn on the Sunday and Allt Mheuran on the Tuesday.

Getting to the Allt a’ Chaorainn involves paddling to the end of the Etive then hiking across the glen and up a hill for twenty minutes until you reach the top of a narrow flume. The river consists of a four hundred metre long series of slide. Great for building up speed and getting air, or as in my case leaving the river completely and landing on the bank a fair distance from the nearest water!

The Allt Mheuran involves an even longer masochistic march across the glen (near the Loch Etive end this time) for a good thirty to forty minutes. This doesn’t sound like much but its all uphill and creek boats weigh an awful lot! When you finally reach the river a short (400 metre?) section of smooth slide is available to play on with or without your boat. The section ends in a thirty foot water slide ending in a fifteen foot drop landing in a small plunge pool. Defiantly one for low water on a sunny day.

Of course it rained on the last day just as we were about to head home. We had hoped that this would have allowed us to do a quick blast down the Coe but unfortunately this wasn’t quite high enough so instead go on to a much healthier looking Etive. What a difference a foot of water makes, so much more fun. Eight of us got on and three go off early after Vicki took a rather unpleasant swim in the bottom of a retentive letterbox. The higher level also managed to send Ian over right angle falls upside down, which while painful to watch didn’t seem to do him any harm.

Rivers are great but what about the drinking!

As I said we managed to paddle every day which was great. During the evening we entertained ourselves in the chalets taking turns to cook (though a big thanks must go out to Vicki and Martin who in our chalet did more than their fair share of cooking). Disturbingly by Thursday our chalet had to take a hundred and twenty empty beer bottles to the recycling bins and two of the eight of us where drinking wine!

The Stronlossit Inn, just outside our accommodation, saw our presence every night, serving an excellent range of real ales. It was also useful to run into other paddlers and catch up on where there might be rivers with water. Their whiskey range was rather good too…

On Monday we drove north to the Findhorn, another reliable river in times of low water. The level we found was about as low as it goes and rather disappointing especially compared to the memories of the last time we ran it. Randolph Leap caught a few people out but apart from that it was all rather sedate. 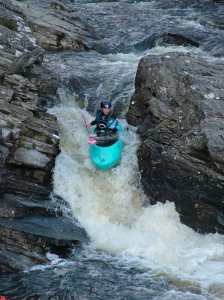 The Morriston is a dam release river that we had been hearing rumours would be running some time during week. On the Wednesday we stopped by to take a look on the way to run the Meig to discover a full release in progress. Great fun was had on both the top and bottom sections of the river despite my line on the top drop that took me right through the slot, not the best way to run it!

That evening we decided that we were going to run the Garry the following day (another dam release river) but seeing as it is just down the road from the Morriston we planned to check if that was running first as its a much better river. Dave S was convinced it wouldn’t be, so much so he agreed to a small wager with me.

Next day I was perhaps regretting my whiskey induced rashness of the night before and was preparing to have my wallet lightened a little. This feeling wasn’t improved when we bumped in to James Farqueson on the way to the river who said it wasn’t running. Despite this (and actually mainly because we couldn’t be bothered with the traffic queue in the other direction) we headed up to the Morriston anyway.

Well kind of, there was what appeared to be a maintenance release, which whilst not providing the levels of the previous day was more than enough to paddle it. The official adjudicator came out on my side and I did a runner with Dave’s money… result!

Unfortunately it soon turned out that the unpleasant feeling in my stomach I had earlier had more to do with the whiskey than the thought of getting taken for a fiver by Dave, and I decided to get off after the top section and take photos from the bank for the rest of the river.

Turns out the release on the Garry never happened much to the annoyance of the seventy five paddlers who turned up for it!

Friday came around and we finally made it up the Meig. No one had paddled this before but we were assured that it only took the compensation flow from the dam at the end of the Lock to make it work.

Wow! Only two kilometres long but completely enclosed in a high gorge. Inspections and portages were the order of the day, great fun but I wouldn’t want to do it with too much more water.

So another Scottish trip out of the way and as you can see despite the lack of water we found plenty to do. I’m convinced that there are actually more low water rivers that can be done, a little research just needs to be done to find them.

Normally I’d list out all the swims had across the week but actually I can’t be bothered this time as they know who they are… However Dave H would like the 1,438 YouTube viewers of his upside down decent of the Morriston last year to take note that he managed it the right way up twice this year!

My photos of the trip can be found here… http://picasaweb.google.co.uk/simon.knox/ScotlandOctober2007

And all that needs to be said about the trip now is “That were proper Bo I tell thee!” 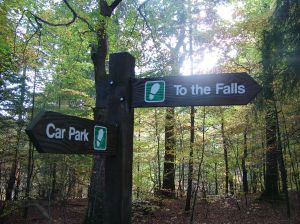